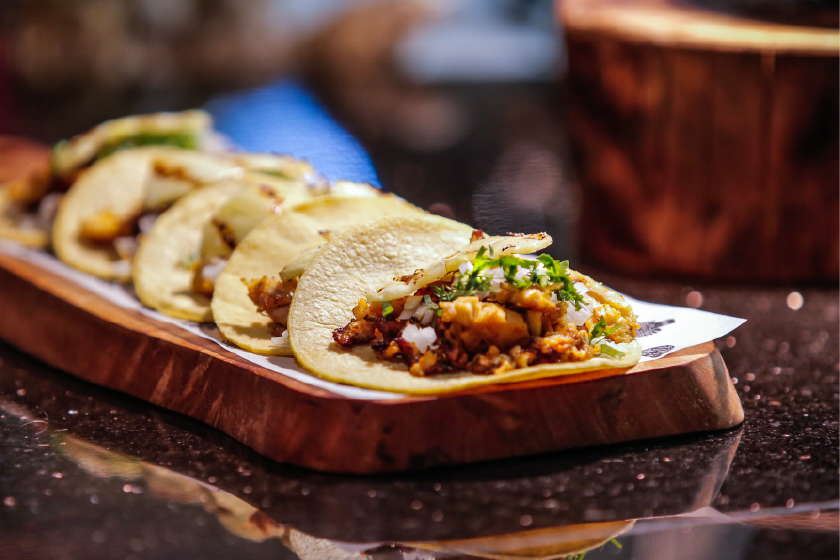 5 Reasons Why This Spot Isn’t Your Typical Indian Restaurant

Meet the ‘King’ of Kulcha…

THIS is How Greeks Party

A decade ago, authentic Mexican restaurants in Dubai were few and far between. But that taco drought is long gone and the city’s now peppered with more tortilla-stuffed goodness than even we can handle  (that’s a lie – we can sooooo handle it.)

We’ve long had a soft spot for Maria Bonita, a true Jumeirah beauty that stands out as a classic amongst the pack. An old-school restaurant that’s quirky and no-fuss, they offer up a variety of eight different taco dishes that look and taste like they’ve just come out of mama’s kitchen.

If you’re as ‘crazy’ about tacos as we are, you’ll have to give Loca bar and restaurant a go. Rather than dishing out the standard Tex-Mex fare most taco lovers are used to, their menu showcases homegrown recipes straight from Mexico City – a traditionalist in all the right ways.

If you ever see a group of a manic people chasing after a taco truck, it’s probably us. Serving California-style Mexican street food, Calle Tacos is all about family-style recipes that have been passed down through generations. With a menu bursting with quirky items (Nutella nachos, anyone?), they’re big on flavour and unafraid to experiment.

Somewhat upscale but still very much down to earth, Tortuga is the kind of place you go when you want the ambience to match the quality of Mexican cuisine on your plate. What we love most about them is their ‘street food meets gourmet’ style – lobster tacos, anyone?

A fusion restaurant blending Mexican, Brazilian and Argentinian specialities, Toro Toro is as trendy as they come. Serving up a wide variety upmarket cuisine that’s playful and well-orchestrated, dining here is an exploration of the best Latin American flavours to be found in Dubai.

Looking for a beachside taco escape? Maya has you covered with picturesque views of the Arabian Gulf and a buzzing atmosphere tailor-made for foodies who live for fun. Serving five different taco selections – from braised lamb to red snapper – just make sure you save some space for tequila shots along the way.

A Goan food truck isn’t exactly the first place you might go to find Latin American cuisine, but leave it to GOBai to spice things up Desi style. Dishing up a spicy taco salad that blends all the fusion elements that Goa is so famous for, this meal on wheels is the perfect pitstop for Mexican foodies in search of a dish that packs a spicy punch.

Blending Japanese delicacies with Latin American flare, Nobu is an upscale dining destination serving up the city’s most precious pint-sized tacos. Packed with unique Pan Asian ingredients made famous by chef Nobuyuki Matsuhisa, this joint never holds back when it comes to culinary surprises.

Spanish for “a little crazy”, the only thing we find insane about Poco Loco is that it’s not open 24 hours a day! A modern Mexican kitchen that’s colourful, playful and true to its roots, there’s no better time to visit than on #TacoTuesdays when you’re free to stuff your face shamelessly with unlimited bites.

When our stomachs get growling, El Chico always manages to overwhelm us with man-sized portions of Mexican fare that’s too good to pass up. From fresh tomato salsas and guacamole to some of our favourite beef tacos in town, this JBR hangout delivers big on flavour, ambience and authenticity.

Given we’re throwing you into the Mexican madness, here’s a favourite joke to throw out at your taco party:

What d’ya call someone else’s cheese?