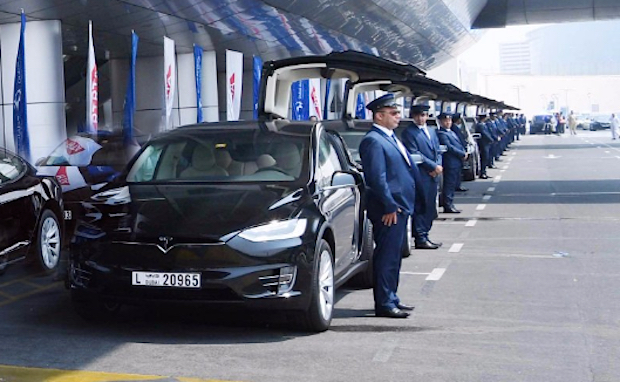 Starting Tuesday, Uber users will have the chance to order their next ride from an all-electric fleet. The launch of UberONE will add 50 premium, smart Tesla taxis to Dubai’s roads. (Did we mention they’re equipped with self-driving technology?)

You’ll be able to select the UberONE option directly on the Uber app, and pricing will likely start at AED 10 for the base fare and a charge of AED 1.9 per kilometre (similar to Uber Black/Black XL services.) The arrival of these fully electric, green vehicles are part of a Dubai push to make the city more sustainable.

If you haven’t been keeping up with the Tesla PR machine, here’s why Dubai’s new taxi fleet is so cool. The electrical vehicles are super friendly on the environment and the Model S even has the largest possible rating of safety in the industry. The vehicles also feature auto-pilot capabilities (and those falcon wing doors just look realllly cool!)

The 50 new Tesla Dubai taxis are part of a deal for 200 vehicles that are on their way to the city in the next few years. They come in two models – the Model S (sedan) and Model X (SUV) – and they look incredibly sleek.

Will you be spending a few extra dirhams more just to get inside a Tesla taxi? Let us know in the comments!

previousWant to Take a Sneak Peek of Dubai's Self-Flying Taxi This Week?