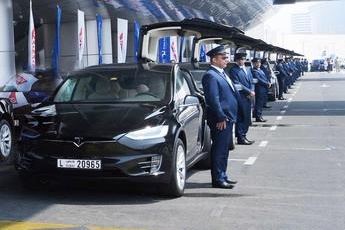 It’s always fun to watch Dubai blaze a trail with cool futuristics concepts, and this time is no different. The city is now officially home to 50 Tesla taxis… (and they’re equipped with self-driving technology!)

Just launched by the RTA this week, the 50 new Tesla taxis are part of a deal for 200 vehicles that are on their way to the city in the next few years. They come in two models, the Model S (sedan) and Model X (SUV), and they look incredibly sleek.

If you haven’t been keeping up with the Tesla PR machine, here’s why Dubai’s new taxi fleet is so cool. The electrical vehicles are super friendly on the environment and the Model S even has the largest possible rating of safety in the industry. The vehicles also feature auto-pilot capabilities (and those falcon wing doors just look realllly cool!)

So how can you book a ride? It’s still early days for the new Tesla fleet so we haven’t been given any hard details on how to reserve a car or what the pricing will be like. But we’ll be updating you once we know more.

For now, let’s wait and see what Tesla Dubai has in store for residents… so expect some crazy cool announcements in the coming weeks.