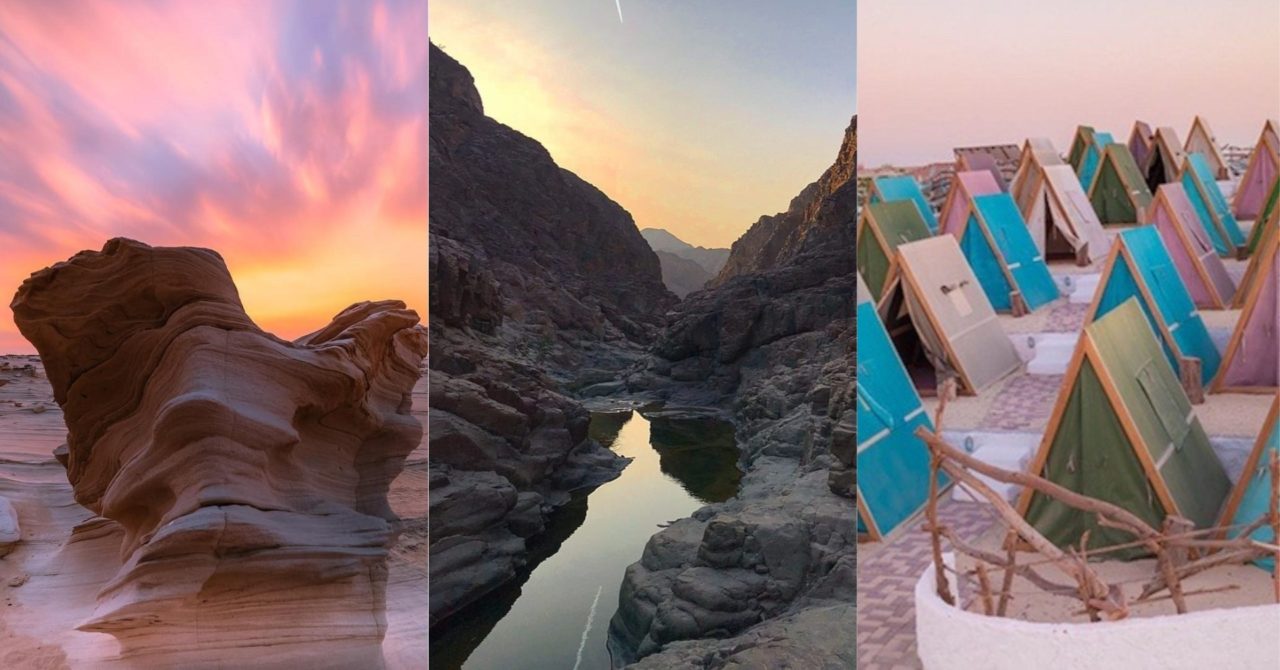 No matter how well you think you know the best hidden gems in UAE, there’s always a new surprise to uncover — from abandoned villages frozen in time to fossil dunes that look otherworldly. Looking for new outdoor adventures? Here are 7 places in UAE you (probably) didn’t know existed…

What to expect: You might have heard stories about the abandoned ghost town of RAK — but pictures don’t do it justice. Located in Al Jazirat Al Hamra, this old pearl fishing village is frozen in time, offering visitors a glimpse of what life was like in the UAE more than half a century ago. From the narrow streets to the derelict ruins, only the most adventurous explore it after sunset.
Find its location… on Google Maps

What to expect: Snoopy Island is, of course, named after Charlie Brown’s pet beagle from the Peanuts comics — and it’s not hard to see why (just Google ‘snoopy on doghouse’.) The beach has chalet rentals and offers a great spot for camping, while the waters around the island are teaming with marine life — perfect for snorkeling and kayaking.
Find its location… on Google Maps

What to expect: Resembling an old-school hippie commune, Banan Beach at Jebel Ali is a newish camp spot most people have yet to experience… let alone know of. This beachside resort has everything from colorful tents to cosy chalets — along with Insta-worthy sea swings and water hammocks. When it comes to off-the-beaten-path experiences… this one is only 20 minutes from Dubai Marina.
Find its location… on Google Maps

What to expect: When you enter the vast palm oasis of Al Ain be prepared for spectacular scenes of nature that will make you forget all about sand… at least for a little while. This oasis of 147,000 date-palms is a UNESCO World Heritage Site and is still watered using the 3,000-year-old falaj irrigation — it’s truly breathtaking.
Find its location… on Google Maps

What to expect: Residents of the capital are well aware of the lush stretch of protected Eastern Mangrove coast, but for the rest of us… it’s still an eye-popping sight. The large mangrove forest is a popular spot for water sports like kayaking, giving you the chance to explore the local wildlife and fauna in a serene atmosphere against the city skyline.
Find its location… on Google Maps

What to expect: Hatta has no doubt become choked with visitors at the weekend, but a much better alternative is Wadi Shawka in RAK. With the nearby Shawka Dam providing overnight campers an ideal spot to sleep under the stars, bring your hiking boots to explore the trails and pack your swimwear to take a dip in the pools.
Find its location… on Google Maps

What to expect: Welcome to Abu Dhabi’s own mini version of Mars — otherworldly fossil dunes that can be found just a 30-minute drive from the city centre outside Mussafah. Shaped by the wind, these awesome monuments of nature are a reminder of the desert’s transformative power. Only keen adventurers need apply…
Find its location… on Google Maps

SEE MORE… This Dubai Hotel Has a ‘Secret’ Jungle Hideaway!

previous7 Fun Activities in Dubai to Try this Weekend

next8 of the Most Beautiful Mosques Around the World