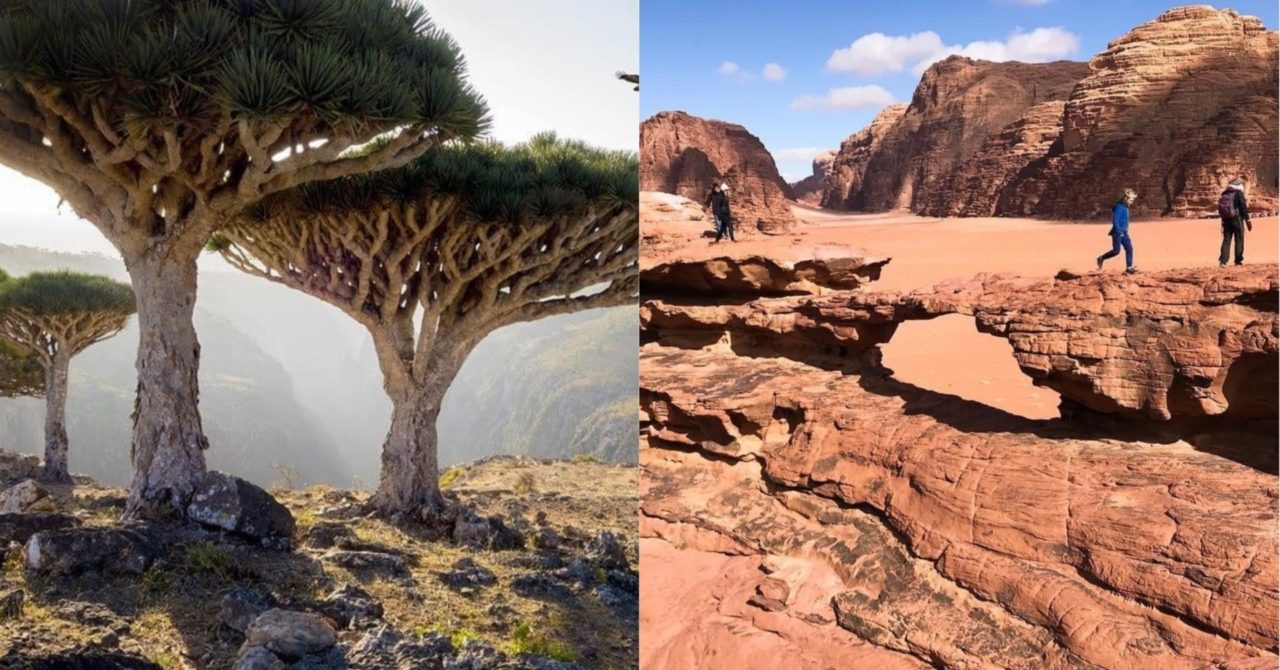 From mountain caves to black sand beaches, the Middle East is home to some of the world’s most stunning natural wonders. Here are 7 places that are guaranteed to inspire your wanderlust…

Why it’s great: It’s not hard to see why Wadi Rum is so often compared to Mars — the landscape really does feel like another planet. Also known as the Valley of the Moon, this desert reserve in the southern part of Jordan features natural arches, sandstone mountains, prehistoric rock engravings and blood red sands. If you’re on your way to Petra, be sure to make a pitstop here.

Why it’s great: Socotra, known as the ‘Jewel of Arabia’, lies off the coast of Yemen and has so much enchanting natural landscape on showcase, from the rugged Hajhir mountains to the dragon’s blood trees that make this island the most alien-looking place on Earth. As the war in Yemen continues unfortunately, it has become extremely difficult to travel to this Unesco-protected island.

Why it’s great: The Rub’ al Khali, known as the Empty Quarter, is the world’s largest uninterrupted sand desert… and it’s a mesermizing place for camping with the cosmos in full view. The area is made up of sand dunes as far as the eye can see – including the the world’s tallest dune Tel Moreeb at over 300 meters high. If you’re looking to really disconnect, there’s no better place to be.

Why it’s great: Located about 50km off the coast of the city of Jizan in the Red Sea, the Farasan Islands are a world away from the desert landscape that dominates Saudi Arabia’s mainland. Reachable via ferry, this archipelago of 176 islands boasts spectacular marine life, nesting grounds for birds, mangroves and other natural treasures.

Why it’s great: Perhaps one of the world’s most famous natural wonders, the Dead Sea is a bucket list destination that doesn’t disappoint. Located in the Jordan Rift Valley, it’s one of the saltiest bodies of water on Earth with mineral-packed mud that have long made it known as ‘nature’s health spa’.

Why it’s great: Located in the mountains north of Beirut, the Jeita Grotto limestone caves are one of the Middle East’s most prized natural gems. Spanning 9 kilometers, visitors can access the site through a series of walkways before hopping on a rowboat for an astonishing journey on the underground river. It’s nothing short of magical… and pictures truly don’t do it justice.

Why it’s great: Have you ever walked along a black sand beach before? At Wadi Qandil, that’s exactly what you’ll find. Located in the coastal region of Lattaki, Wadi Qandil and the surrounding area feature many of Syria’s most picturesque natural landscapes — including its popular coast covered in black sand.

SEE ALSO… 7 of the Best Places to Travel in February

previous7 of the Best Places to Travel in February 2019