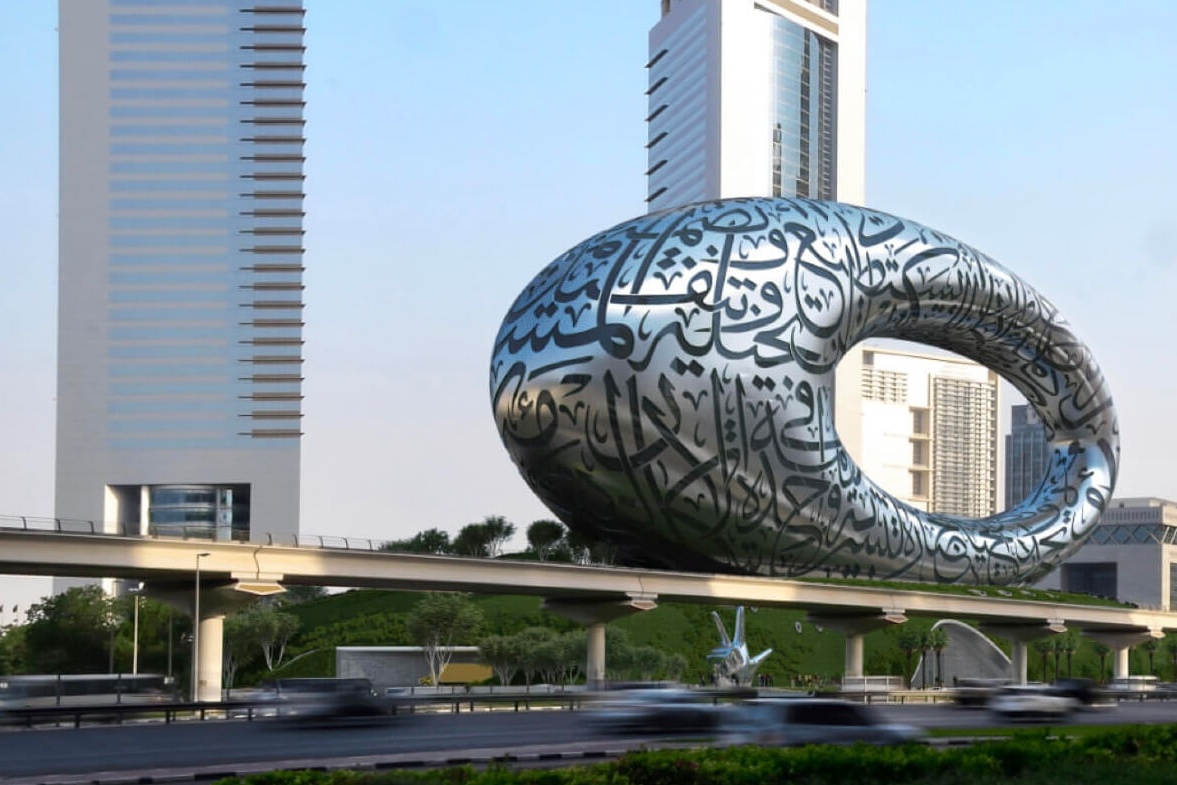 There are some incredible new Dubai landmarks set to reshape the city — from Ain Dubai at Bluewaters Island to the Museum of the Future. Want a sneak peek of all the best UAE attractions getting ready to launch? Here are 7 projects we’re most excited about…

A bookworm’s paradise is unfolding at the new Mohammed bin Rashid Library in Al Jaddaf overlooking Dubai Creek. Designed in the shape of the rehl, a book rest commonly used for placing the Holy Quran, the facility will boast eight specialized libraries housing over 4.5 million printed, digital and audio books, along with a 500-seat auditorium and art gallery — with completion expected before end of 2018.

Inspired by the tales of Aladdin and Sinbad the Sailor, Aladdin City feels almost like a fantasy rising out of the waters of Dubai Creek. The project will be made up of three towers in the shape of shiny gold genie lamps with the highest tower at 34 storeys — all connected by a pedestrian bridge in the shape of dragons and snakes. Completion is expected in 2019.

What the emirate is lacking in big-space venues will soon be a thing of the past with the launch of Dubai Arena. With a capacity for 20,000 people, the 500,000 sq. ft. multi-purpose arena at City Walk will play host to everything from sporting events to concerts. It’s scheduled for completion before the end of 2018.

4. Museum of the Future

You’ve already noticed the Museum of the Future under construction outside Emirates Towers on SZR, with its soon-to-be iconic design already in place. The oval-shaped superstructure features an Arabic poem in calligraphy on its facade, and will house an incubation center to help foster futuristic innovation and design. The museum will open in 2019.

You’ll soon be able to explore the Night Souk & Boardwalk at Deira Islands, featuring over 5,000 shops and restaurants designed in the style of a traditional Arabic souk. The waterfront city will add 40km to Dubai’s coastline — including 21km of beach. It’s expected to be a major draw for bargain-hunters and traders from around the world… we can’t wait for this!

Home to the world’s largest observation wheel Ain Dubai, Bluewaters Island is something any visitor to Dubai Marina will have seen rising in recent years. Expected to open to the public in 2018, the project will be connected to The Beach via a 265-meter pedestrian bridge and will be home to a range of retail and dining concepts.

7. … and a world-class museum in Abu Dhabi

Now that Louvre Abu Dhabi has gained the spotlight of the art world, the UAE capital looks set to push full steam ahead with plans for the Guggenheim Abu Dhabi. The world-class museum on Saadiyat Island has been designed by famed architect Frank Gehry— as of now, the project has no official completion date but we can’t wait to see what’s in store.

previousAre These The Coolest Co-Working Spaces in Dubai?

next5 Real Places From 'Game of Thrones' You Can Actually Visit