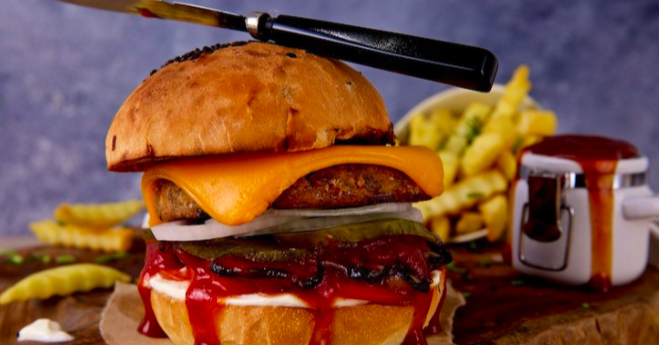 World Vegan Day is just around the corner, and to celebrate we’ve put together a list of some of our favourite vegan restaurants in Dubai. So whether you’re craving a big juicy burger or an oh-so-cheesy pizza, here’s where to find the best vegan food in Dubai…

Whether or not you’re vegan, you need to try this! The vegan truffle mushroom risotto at Urth by Nabz & G is delishh, especially when mixed with the vegan truffle cream on the side.

Ever tried out the vegan burgers at Dirt? Hands-down one of the best vegan restaurants in Dubai! They’ve got a variety of mock chicken & beef burgers, and a tasty Hash Brown burger too – all of which you can customize with vegan cheese.

From banana pancakes to sushi, the food at Super Natural Kitchen will seriously impress your tastebuds. This raw, gluten-free, sugar-free and vegan restaurant in Dubai serves only vegan food, and also hosts regular workshops, where vegans can learn how to create their own vegan dishes at home.

Looking for the best vegan (or even vegetarian) sushi in town? Moshi has a huge variety of creative veggie/vegan options on their menu. You need to try their tofu roll, asparagus roll and hummus & cucumber roll.

From vegan lotus brownies to chocolate chip cookies, Sugar Moo has some of the tastiest vegan desserts in Dubai. Vegans, their vegan brownie mess in a jar is an absolute must-try.

Where: Online only
Others we love: Spice Klub, Menagerie, Super Natural Kitchen

Read more: Looking for some of the best vegan pizzas in Dubai? Check out our list here…

previous7 of the Best Indian Street Food in Dubai — For AED 10 or Less!

next7 Places in Dubai that Serve Breakfast in the Afternoon