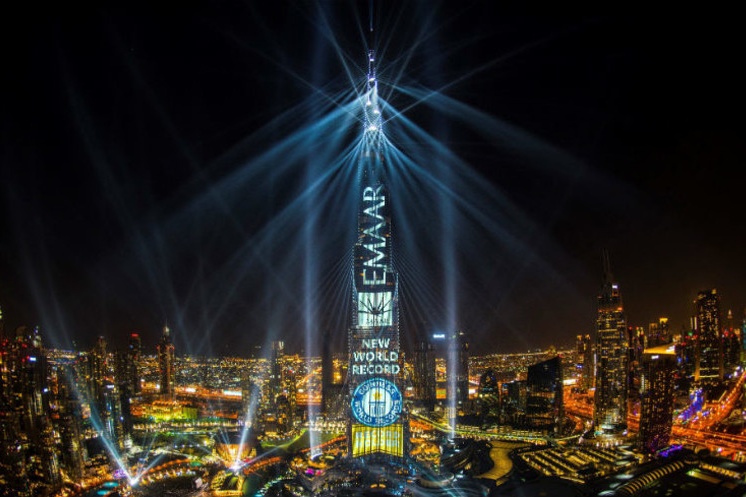 If you read our last story on Dubai’s Guinness World Records, you’ll know that our city holds some pretty weird ones… From the world’s largest puzzle solved underwater to the world’s largest synchronized car dance – let’s just say that there’s a long list of these! So in addition to the previous ones we listed, here are 15 more…

1. Most nationalities washing their hands simultaneously

This Guinness World Record was achieved by Lifebuoy back in 2012. In celebration of Global Handwashing Day, over 200 participants from 72 countries washed their hands simultaneously in Dubai.

As hot as Dubai may be, we still hold the Guinness World Record for the world’s longest scarf! Measuring 1,971 metres, the scarf was created in celebration the the UAE’s 44th National Day!

We can’t even ski normally, so it’s hard to imagine what skiing blindfolded is like.. However a team of ski instructors, including two visually impaired participants did it and broke the Guinness World Record! The farthest distance skied blindfolded on an indoor ski slope in an hour is 25.1km!

Yummm – now this is one Guinness World Record we’d love to be a part of! The largest serving of mango sticky rice measured 2,831 kgs, and was distributed to labour camps throughout Dubai.

6. Most nationalities in a yoga class

Dubai yogis, were you a part of this? The record for most nationalities in one yoga class is 112, and was achieved as part of the Dubai Fitness Challenge back in 2017.

Well, this would be fun to carry around and hand over to clients! The world’s largest business card measures 6 sq. metres, and was created by Ramkumar Sarangapani – his 3rd Guinness World Record so far!

8. Fastest time to type the alphabet backwards on a tablet computer

We just tried it and it took us 33 seconds, but Amal Aljabry can do it in 6.82 seconds – the fastest time to type the alphabet backwards on a tablet computer! Think you can beat it? All you need to do is apply!

9. Fastest time to climb the Burj Khalifa by bicycle

How is this even possible? Somehow, using a commercially available bike, Vittorio Brumotti successfully climbed up 3,704 steps inside the Burj Khalifa in 2 hours and 20 minutes!

Created by Ayesha Siddequa, the largest abaya in the world is 10 metres long, and 4.2 metres wide. Yep, that’s basically an abaya that only a giant could pull off.

The speedy nail technicians at Beauty Connection Spa in Dubai Mall (somehow) managed to file and varnish 5,193 nails in 8 hours! If counting both hands and feet, that would be 519 people.. plus 3 extra nails.

Yep, this Guinness World Record actually exists. Also a part of the Dubai Fitness Challenge, Kushtrim Ketemi achieved 99 side to side hops in 30 seconds – the most in the world!

The most high fives given by a mascot in 3 minutes is 323, and was done at Winchester School Jebel Ali! Do you think the mascot celebrated the win with more high fives?

14. Most people to parachute from a balloon

As random as it is, Dubai holds 2 Guinness World Records for the most people to parachute from a balloon! The first one was that 40 skydivers jumping out of a balloon, and the second was that 25 of them were done simultaneously.

Here’s another one of Dubai’s weirdest Guinness World Records! Displayed at the Gulf Food Exhibition, the heaviest bag of rice in the world weighs 557 kgs – and was donated to charity after the event.

Read more: Check out our Trending and Explore categories to get to know the city better…

next13 Weird Superstitions That We've All Heard Growing Up