It’s finally time to return to a galaxy far, far away. All the buzz from Star Wars fandom is in agreement: The Last Jedi is going to be the biggest Star Wars movie of all time when it releases worldwide on December 14.

With new revelations, unlocked mysteries, a darker plot and a final farewell to Princess Leia… Star Wars: Episode VIII will be an epic journey back to the world that George Lucas created.

You can purchase cinema tickets today from www.starwarsthelastjedi.me

The saga continues in Star Wars: The Last Jedi 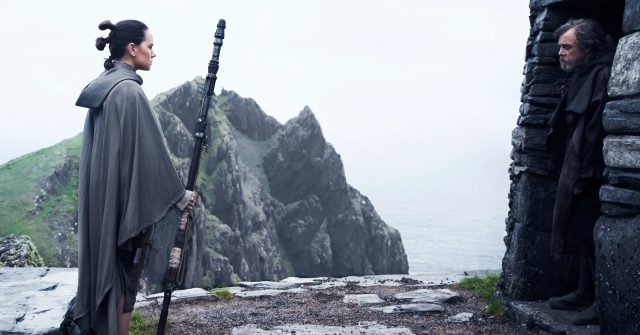 Where we are in the Star Wars universe…

The Last Jedi is the second episode in the sequel trilogy, and will centre around the question “What’s going on with Luke Skywalker?” Star Wars fans can expect more backstory on the early days of the Galactic Republic and the battle between light and darkness… we can’t wait for the light-sabre action!

The film picks up immediately after the cliffhanger in The Force Awakens, which released in 2015… and we’ve got questions:

It’s been two years since J. J. Abrams released The Force Awakens in a major revamp for the new Star Wars sequel trilogy. The film was universally praised (it boasts a 93% on Rotten Tomatoes) and set the stage for Rian Johnson to work his magic on The Last Jedi.

As the penultimate episode in the trilogy, fangirls and fanboys can expect things to get darker with Johnson’s adaptation. The director has paid meticulous attention to detail in moving the saga forward, with Mark Hamill and the late Carrie Fisher returning in their iconic roles as Luke and Leia.

Even before The Last Jedi releases on December 15, director Rian Johnson has already been invited to direct a whole trilogy set based on the unexplored Star Wars universe… we’re talking three new films! Honestly, that sounds like the ultimate vote of confidence in what The Last Jedi will represent in the franchise.

Star Wars: The Last Jedi releases in UAE cinemas on December 14. You can purchase cinema tickets today from www.starwarsthelastjedi.me

nextWatch What Happens When a Star Wars Robot Lands in Dubai...