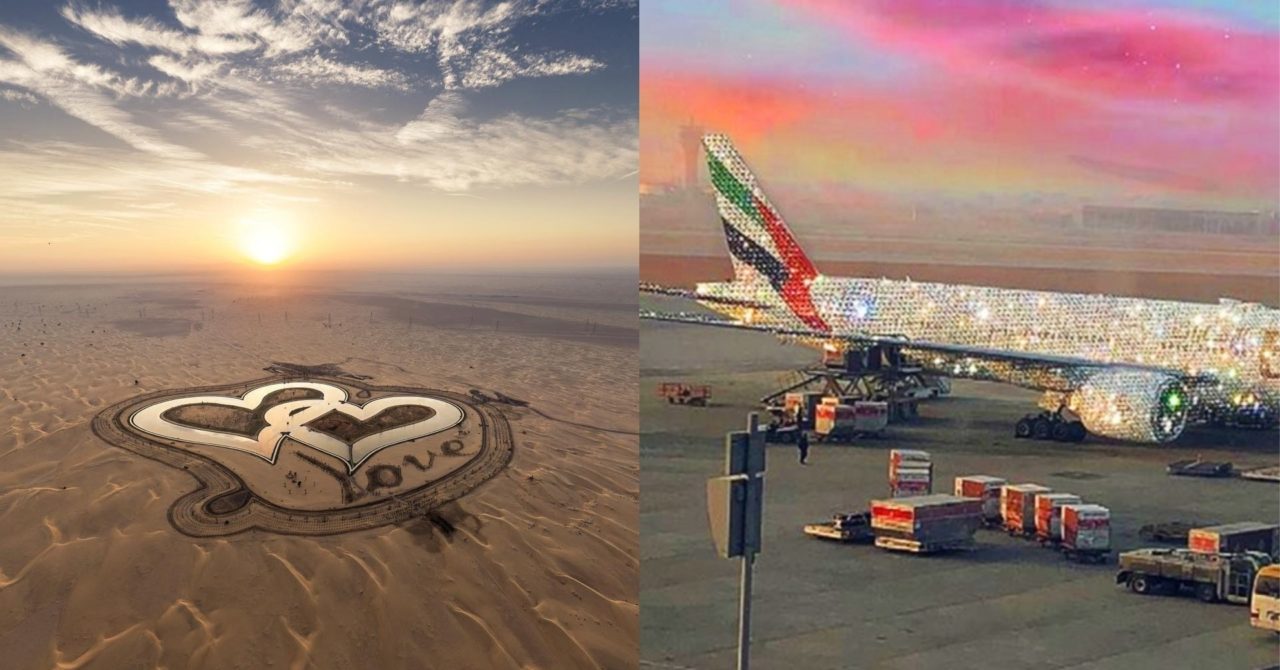 Year after year, Dubai manages to capture the world’s attention with things that dazzle the imagination… and 2018 was no exception. To cap off the year on a high note, we’ve put together 18 of our favorite “Only in Dubai” moments that had us all buzzing… 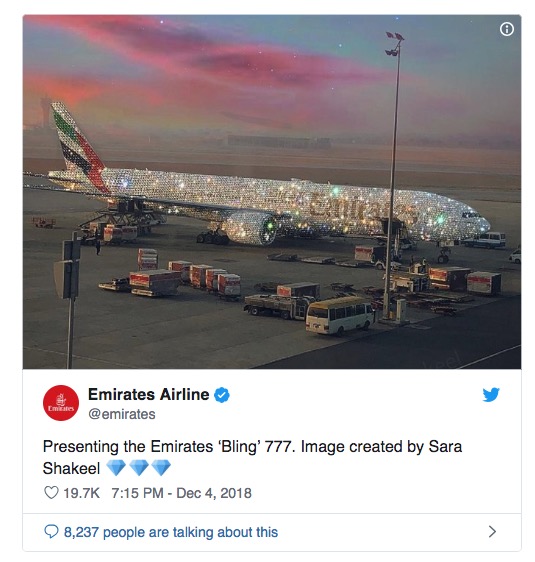 Details: People around the world lost their collective minds when Emirates tweeted out this photoshopped image of a blinged out 777… even Funnyordie.com weighed in on the spectacle with some appropriate “not enough diamonds” jokes. Perhaps the more shocking thing about all this was not the Swavroski-style plane… but how it would surprise no one if it actually popped up in Dubai.

Details: “Excuse me… but my dish needs a bit more gold.” Oh Dubai, you’ve definitely got an appetite for edible gold — from 24-carat samosas to chicken nuggets and cappuccinos. Anything for the ‘gram, right?

Details: Dubai Police knows a thing or two about futuristic toys, but the ‘Hoversurf’ flying motorcycle takes things to another level… literally. Unveiled at GITEX this year, the all-electric vehicle – set to join Dubai Police’s fleet by 2020 – can hit top speeds of 96 kmph and climb up to a height of 50 meters. At the very least, it should make for a great story the next time you get pulled over.

Details: The man-made ‘love lakes’ near Al Qudra could make even the coldest hearts stop and say “awwwww” — you’ll want to dust off the drone to get a better view (or instead check them out on Google Maps… go technology!)

6. Titanic II to sail from Dubai 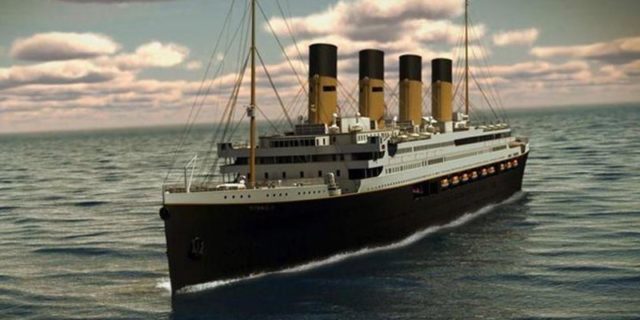 Details: If you’re hearing “I’m the king of the world!” in your head right now, you’re not alone. That’s because there are plans for a replica of the RMS Titanic to set sail from Dubai on its maiden voyage in 2022. We gotta wonder what they’ll be serving in first-class this time around…

Details: Dubai to Abu Dhabi… in 12 minutes! The proposed Hyperloop transport system being built in the desert can travel at speeds of up to 1,200kph along a vacuum-sealed track — but no word yet on when it may launch in the UAE. If it does becomes a reality, your morning commutes will never be the same.

Details: Move over Dubai Fountain… you’ve got some serious competition coming. A new show is coming to one of the city’s most famous landmarks, Palm Jumeirah, and will be located at new hotspot The Pointe. Get ready to trade those Burj Khalifa views for an epic Atlantis backdrop…

Details: We legit can’t even contain our excitement for this one: the RTA this year began testing driverless taxis in Dubai… and if you’ve ever had the pleasure of trying to hail a cab during peak time, you’re applauding this alongside us right now.

Details: Ain Dubai is set to become the world’s largest observation wheel when it officially launches in 2019 — but Bluewaters Island is also bringing an unexpected surprise for adventure seekers in the form of the world’s highest rope climbing platform. Looking for a good view? We can’t think of anything that will top this. 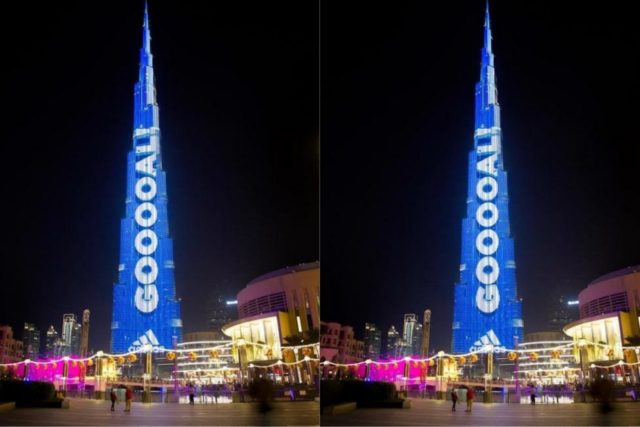 Details: You couldn’t escape the World Cup 2018 action in Dubai this past summer — and it might have something to do with the Burj Khalifa turned scorekeeper. Providing a stream of match updates for fans in real-time, it was one of the city’s more memorable moments in sporting history. 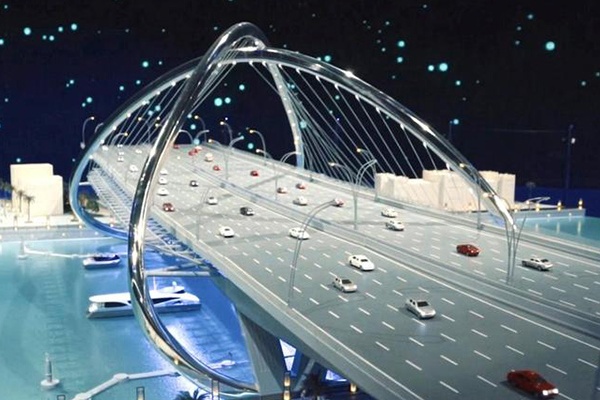 Details: Dubai’s heading to infinity — and wellllll beyond. The new Shindagha Bridge over Dubai Creek was announced this year, set to extend 295 meters and featuring a jaw-dropping design based on the mathematical symbol for infinity. Gotta love a cool mega project…

Details: Your next visit to a mall in Dubai might feel like a walk in the park. That’s because the world’s first ‘nature-inspired’ shopping centre is set to launch in the emirate soon. Currently under construction near Global Village, Cityland Mall will feature a 200,000 sq.ft. Central Park courtyard and six pavilions inspired by different parts of the world. 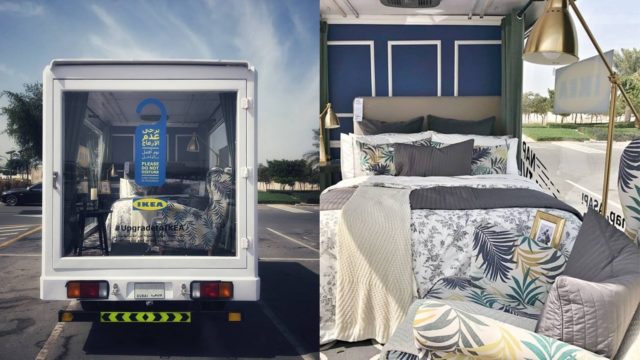 Details: Leave it to Ikea to make all our collective dreams come true. Earlier this year, they launched a mobile nap truck offering 20-minute power naps to the city’s sleep deprived… if only we could have it parked outside our offices permanently.

Details: So you think you can dance? Well, you obviously haven’t seen 180 Nissan Patrols in a synchronised routine before. No surprise here though, given Dubai’s history of  weird Guinness World Records.

Details: We guarantee you’ve never experienced yoga like this before. Atlantis Aquarium launched epic ‘underwater’ Hatha yoga classes this year that surround you with thousands of marine animals. Not a bad view, eh?

Details: Bored of dry land? You might want to check out the UAE’s first floating swimming pool located 50 meters offshore in the waters of the Palm. It’s a cool way to make a splash — and the views ain’t bad either.

Details: The ‘Flying Rescuer’ from Dubai Municipality is designed to save lives by dropping lifebuoy rings to swimmers in distress. Fitted with two cameras and a speaker, this lifeguard in the sky is a prime example of how the city is absolutely tech-crazy.

previousYou Need to Try this Chocolate Trivia Challenge at Your Next Game Night!